About 100 people from across the UK turned up to Jisc’s latest learning analytics network event at the OU to share their experiences of implementing learning analytics, and to hear about some of the latest developments. 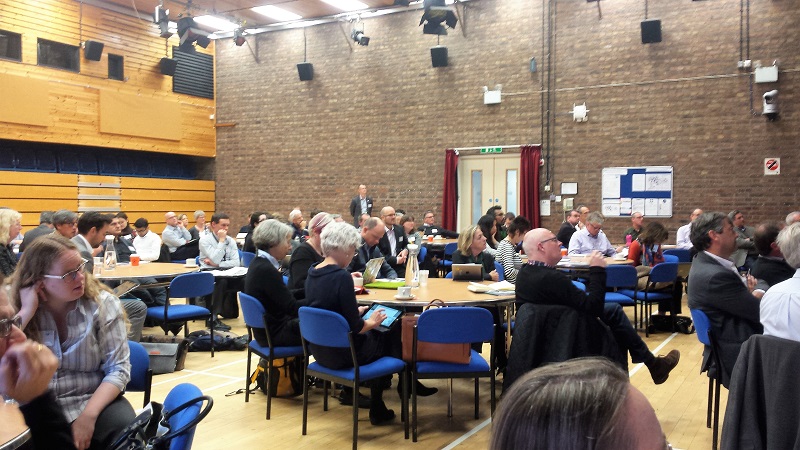 Michael discussed Jisc’s emerging vision of “analytics maturity” at a national level, moving from the collection of data through a hierarchy of ever more sophisticated analytics processes. Meanwhile the sector moves from experimentation at an institutional level to broader transformation as institutions increasingly share their experiences and (anonymised) data with each other. 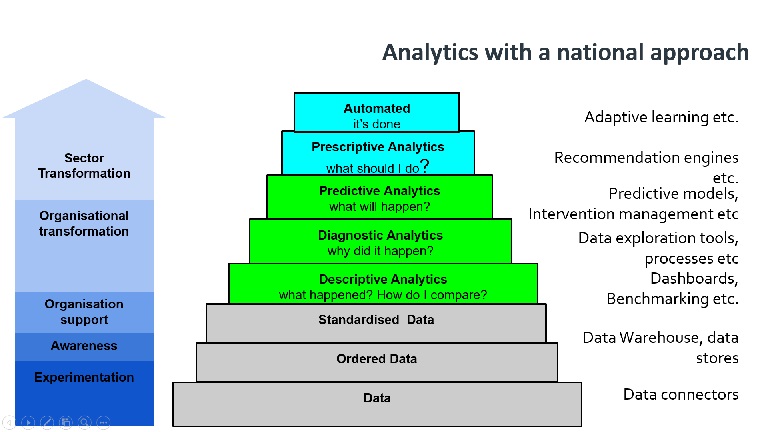 Lee then discussed recent developments in library analytics, where many UK universities have been working to analyse library resource usage and other aspects of library activity. With so many different systems, it has not always been easy to carry out comparative analytics between institutions. However, the area continues to move forward, and there is scope for more librarians to join the Business Intelligence project run by Jisc and the Higher Education Statistics Agency.

Bart Rienties was next up, and gave an engaging presentation on how learning design meets learning analytics, discussing some of the latest research in this area at the OU, [Presentation on Slideshare] where details of the learning design of a module were combined with student feedback data, VLE activity data and the academic performance data of over 100,000 students.

Bart and his colleagues found that different approaches to learning design (Constructivist, Assessment-driven, Productive and Social Constructivist) resulted in different patterns of activity in the VLE, and that learning design strongly influences engagement, student satisfaction and performance. The learning design of a module predicts its completion rate, and, in particular, activities involving communication have a positive impact on completion.

Other interesting findings were that interactive learning design positively predicts student satisfaction – and that there is no relation between VLE engagement and satisfaction, or between completion of modules and satisfaction.

Bart also invited Amara Atif, from Macquarie University in New South Wales, to discuss her PhD research around early alert systems to improve student engagement. Her slides are incorporated in Bart’s presentation. Amara analysed student and teacher perceptions of early alert systems. She found that 79% of the 639 students who responded to her survey wished to be contacted if their performance in a unit was unsatisfactory. Most wanted to be contacted by email rather than other methods.

These findings have similarities with those of a survey carried out by Jisc, where 71% of students said they would be happy for data such as their library or virtual learning environment usage to be used by their university if it could help to improve their grades.

After lunch we had two parallel sessions. Il-Hyun Jo, visiting the UK from Ewha Women’s University in South Korea, spoke about how learning analytics is being used to address the challenges in Korean higher education. He outlined some of the growing number of research projects which are emerging in this area in Korea [Powerpoint presentation, 4.7Mb].

Meanwhile, Andrew Cormack, Jisc’s Chief Regulatory Adviser, discussed the implications of the forthcoming EU General Data Protection Regulation, which was due to apply in the UK from May 2018 [Powerpoint presentation in PDF, 682Kb]. Whether Brexit will derail the application of this in the UK remains to be seen – the Information Commissioner’s Office suggests it may do, but that it is advisable to consider its implications anyway.

Particularly important to universities and colleges is whether the GDPR has implications on the need to request student consent for carrying out learning analytics. I’ll be working with Andrew to provide further guidance to institutions on this issue, so stay tuned to this blog if you’re interested (or sign up to the analytics@jiscmail list for notifications).

John Domingue from the OU’s Knowledge Media Institute then updated us on blockchain and its potential in higher and further education [Presentation on Slideshare]. He looked at how academic certificates could be held on blockchains, and also the sharing of academic proficiency and progress records. This could be of use to a range of stakeholders, in particular employers. Peer reputation could also be built in. Advantages of this, John suggested, would include better identity management and reduction of the potential for fraud, and ownership of the data by students themselves rather than institutions.

While John was discussing potential future scenarios with blockchain, David Evans, Group Director E-Services from North Warwickshire and Hinckley College, was outlining the implementation of a learning analytics dashboard at his college. I missed this session unfortunately but hope to upload his presentation here imminently.

Our next network event will be held early in 2017. We’ll release details of that imminently via the analytics@jiscmail list, and hope to see many of you again then.